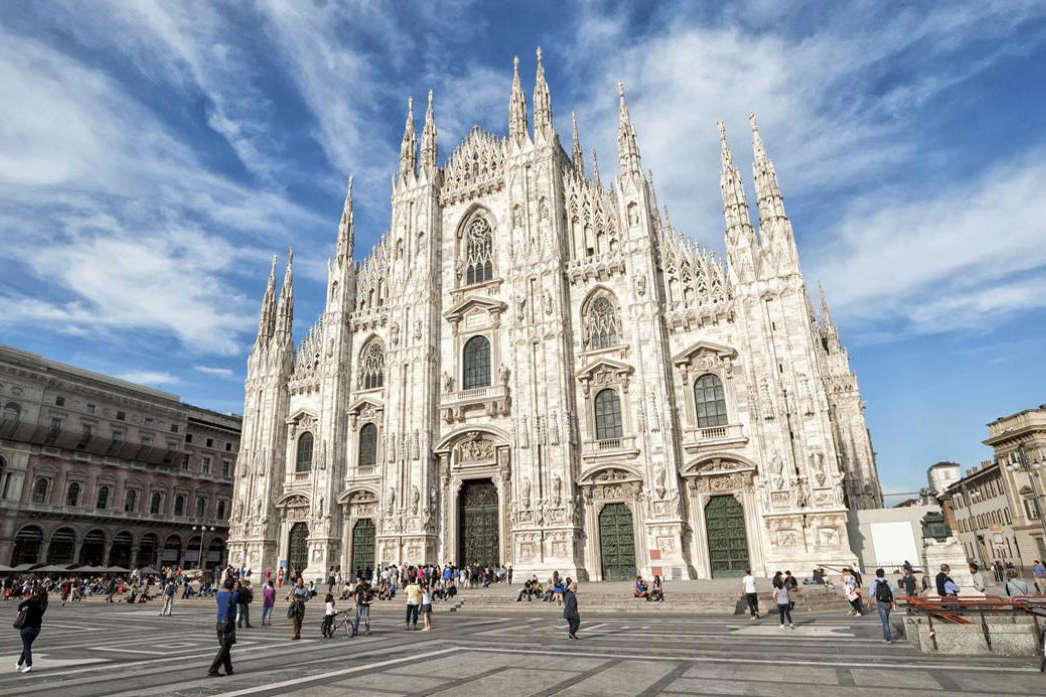 This tour is focused on the  visit of the most important sites of Christianity present in Italy. From north to south to discover and breath the holy atmosphere  preserved in monuments churches and sites sof the peninsula. An unforgettable journey for your eyes and your soul across several Italian cities and towns.

Day 1 – Italy  – Milan
(Breakfast – Dinner)
Arrival in Milan. Sightseeing of the city, with the beautiful Dome which is the symbol of Milan, the Scala Theatre traditionally recognized  as being the most famous opera theatre in the world. After a lunch at leisure we proceed for the church of Santa Maria delle Grazie. In the former refectory (cenacolo) of the monastery is the famous portrayal of the “Last Supper”  by Leonardo da Vinci, one of the most superb paintings of history and of an enormous spiritual meaning. Check in at hotel, dinner and overnight.

Day 2 – Padua – Venice (optional)
(Breakfast)
After breakfast we proceed to Padua,  the city of St. Anthony the Hermit, patron saint of Padua  who died there.  Visit of the Basilica del Santo, one of the most important pilgrimage churches in Italy,  dedicated to St. Anthony. You continue  with the visit of the Cappella degli Scrovegni with hits frescoes painted by Giotto  and the Church of Hermits  famous for the Mantegna  paintings. Afternoon at leisure  or optional short visit of Venice. Check in at hotel and overnight.

Day 3 – Padua – Ravenna – Assisi
(Breakfast/ Dinner)
After an early breakfast  we leave Padua heading south. Our first stop will be Ravenna, the city of mosaics, formerly capital of the Western Empire.  Brief tour  of the city and visit of the spectacular Basilica of San Vitale , highest expression of Byzantine art.  Lunch at leisure and departure for Assisi. Arrival in the late afternoon, check-in at hotel, dinner and overnight.

Day 4 – Assisi
(Breakfast/Dinner)
All the morning is dedicated to a guided tour of the city of St. Francis which deeply retains its medieval character. Tour includes the Basilica of St. Francis which is divided in two different churches: Basilica Inferiore and Basilica Superiore, famous for the Giotto’s frescoes which was considerably damaged by an earthquake in 1997.  The visit continues  with the Saint Rufino Church,  Piazza del Comune which contains the “Temple of Minerva” a temple converted into a church and the famous Church of Santa Chiara. Lunch at leisure and afternoon visit to the Basilica of Santa Maria degli Angeli where a mass will be taken. Return to hotel and overnight.

Day 5 – Assisi and Loreto
(Breakfast  / Dinner)
After breakfast, we will depart to Loreto. This small town is grouped around its well-known sanctuary church which is the scene of a famous pilgrimage. Enjoy a walking tour  of the town of Loreto which will  include a moment of prayer  in the  marvelous “Sanctuary of the Holy House of Mary” which was started at the end of XV century and completed only in the XVIII century. Many famous architects, painters and sculptors contributed to the building of the church and in particular, Bramante and Vanvitelli.  Check-in at hotel, dinner and overnight.

Day 6 – Monte Sant’Angelo and San Giovanni Rotondo
(Breakfast / Dinner)
After spending part of the morning  in Loreto we depart to Monte Sant’Angelo. This beautiful town built on a spur dominated by the massive  form of its castle overlooking  both Gargano Promontory and the sea. The town  is dedicated to the Archangel Michael. Sightseeing of the town and visit of  the Sanctuary of San Michael  designed in the transitional Romanesque-Gothic style. Arrival in San Giovanni Rotondo , site of pilgrimage  dear to myriad devotees of Padre Pio who was sanctified San Pio in 1999. Check-in at hotel, ,dinner and overnight.

Day 7 – San Giovanni Rotondo – Montecassino – Rome
(Breakfast / Dinner)
The day begins with a visit and mass in the Convent of San Pio where the “monk of Pietralcina” is buried. Visit of the Chiesa Nuova, the sanctuary dedicated to the Saint.   We will leave San Giovanni Rotondo heading north direction Rome having our first stop in Montecassino, one of the holy places of Roman Catholicism. Visit of the monastery,  mother house of the Benedictines. Optional visit to the Cassino war cemetery, where hundreds of  allied soldiers who attended the famous “Battle of Cassino” (May 1944), are buried. Arrival in the Eternal City in the late afternoon. Check- in at hotel, dinner and  overnight.

Day  8– Rome sightseeing/Papal Audience (on Wednesdays only)
(Breakfast/Dinner)
After breakfast  you  will  attend the  Papal Audience with Pope Francis , followed by a visit of St Peter’s Basilica, Vatican Museums and Sistine Chapel, the splendid vault painted by Michelangelo. As alternative all the morning will highlight the most important sites of the Romanism as the  Forum, Colosseum, Piazza Venezia and the city center  Return to hotel, dinner  and overnight.

Day 9 – Rome – St Paul’s Basilica and Catacombs
(Breakfast – Dinner)
This morning,  departure to St. Paul’s outside the Wall, the traditional site of Paul’s tomb, followed by a visit to the Basilica of St.John and the Scala Santa,  which will be followed by a visit and a mass at the Catacombs (S. Domitilla, St. Callistus or St. Sebastian). Return to hotel, leisure. Dinner and overnight at hotel

Day 10 – Rome – Siena – Montecatini
(Dinner)
After  breakfast we leave Rome, heading north. Stop in Siena. More than anywhere else, Siena conveys the aspects of a medieval city with its narrow Gothic streets, lined with palaces and patrician mansions, which converge on the Piazza del Campo worldwide famous for its horse riding. The city was the birthplace of St. Catherine, patron saint of Siena and one of the most venerated saints of Christianity.