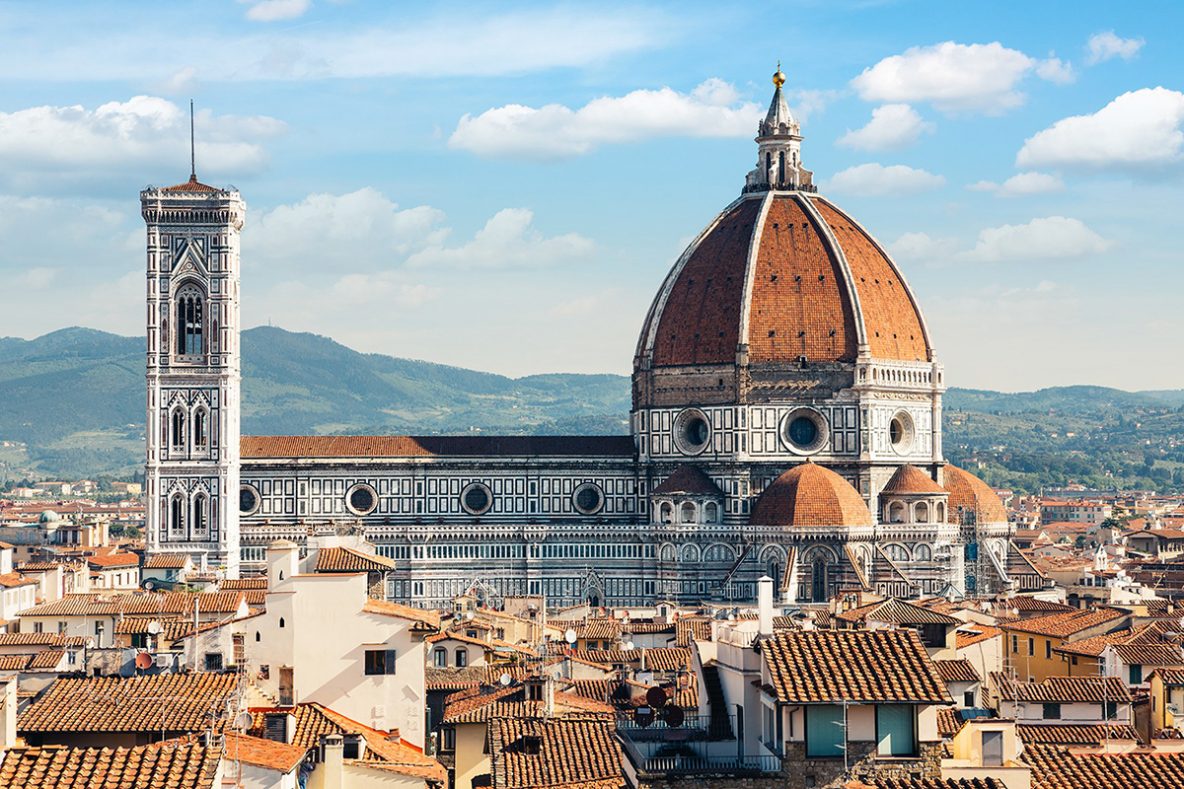 Day 1 Departure
Your Italian adventure begins as you depart on your international flight.

Day 2  Arrival in Milan
You will be met at the airport in Milan by your Tour Manager. Begin your time in Italy with a stop to overlook the famed Lake Garda, the largest lake in Italy. Continue on to Verona, home to Roman ruins and a courtyard that reminisces the scenes from Romeo and Juliet, whose storyline is based in Verona. Finish the day at your hotel for dinner and overnight in Verona area. (B-D)

Day 3 Venice
You will travel by boat to the magical city of Venice. Rising between sea and sky, this fascinating city boasts waterways and boats instead of roads and cars, encompassing 118 islands separated by more than 150 canals. You will stand in the Piazza San Marco, bordered on three sides by palatial arcades in two tiers and faced on the other by the Basilica of St. Mark, one of the world’s most magnificent churches. If possible, you’ll visit the Basilica with its treasure of marble and gold background mosaics. From the square, you can see the famous Bell Tower and the Clock Tower, as well as the charming pink and white Doges’ Palace. You’ll view the sadly romantic Bridge of Sighs. There is much more to see in Venice and you’ll enjoy free time to explore on your own. You can shop, stroll along the bridges and canals or, perhaps, indulge in a gondola ride along the Grand Canal. Dinner and overnight in Venice area ( B-D)

Day 4 Pisa
Travel to Pisa where you can snap your photo in front of the famous Leaning Tower. This 180 foot tall round tower is over 10 degrees out of perpendicular. In the past, some thought the tower was designed to lean. In fact, it was designed to stand straight and tall. The tower began to lean during its construction in 1173 and corrective efforts failed. Even if it did not lean, it would still be one of the most remarkable bell towers in Europe. While the tower is a great source of pride for the town’s people, it is just one of several renowned buildings in the center of Pisa. Check into your area hotel for dinner and overnight in Montecatini, Florence area. (B-D)

Day 5 Florence
The elegant city of Florence is nestled between a line of hills and the banks of the Arno River. During your stay, you will have time to enjoy the beautiful gardens and stroll through the open-air markets. Every street, every square and winding alley of Florence is a showcase for Romanesque, Gothic and Renaissance grandeur. Among the wealth of masterpieces to be found in Florence, you’ll see the Piazza della Signoria with its Neptune Fountain and Vecchio Palace, the Santa Maria del Fiore Cathedral which houses Michelangelo’s unfinished Pietá, the Baptistry which features Ghiberti’s famous Gates of Paradise and the Academy where you can view some of Michelangelo’s finished and unfinished work, including the awe-inspiring David. Return to your hotel for dinner and overnight (B-D).

Day 6 San Gimignano and Siena
This morning, continue on to one of the most charming and picturesque of all the Tuscan hill towns, San Gimignano. Magical, medieval towers dominate the town. At one time there were more than 70 towers, but only 14 remain today. Beautiful Siena is built across several hills and valleys. The focal point of the city is the shell-shaped town square which is both a meeting place and market place. It is also the venue for the town’s famous horse race known as the “Palio”. Dinner and overnight in Montecatini (B-D).

Day 7 Assisi
Your journey continues as you travel to Assisi, a charming medieval town which was the home of St. Francis. Just two years after his death, the large Basilica was started in his memory. At one time, the land on which the church stands was an execution ground for condemned criminals. In his humility, St. Francis asked to be buried there and it became known as the Hill of Paradise. The church contains his tomb and many great works of art.  Dinner and overnight in Rome area. (B-D)

Day 8 Ancient Rome
History is woven through the streets and neighborhoods of Rome as in no other city. Today you’ll explore the many wonders of ancient Rome when you visit the magnificent Colosseum and the Pantheon. From the most sacred hill of ancient Rome, Campidoglio, you’ll view the Forum. You’ll also view the Circus Maximus, the Arch of Titus, the famous Baths of Caracalla and the Arch of Constantine. You’ll see the Victor Emanuel Monument and the Monti Region, Rome’s most ancient neighborhood which spreads over three of her seven hills. In the afternoon, you’ll discover why Rome is also known as the “City of Love”. You’ll explore the romance of Rome as you climb the graceful Spanish Steps and stop at the famous Trevi Fountain. Legend says those who toss a coin into the fountain will one day return to Rome to toss another into the waters of Trevi. Return to hotel for dinner and overnight or optional tour of Rome Illuminated with dinner. (B-D)

Day 9 Vatican City and Christian Rome
Christianity came late in her long history, conquering and changing Rome in a way few other invaders have. Today, you will experience the glory of Christian Rome when you visit the Vatican, home to one of the greatest museums in the world. And, of course, you’ll enter St. Peter’s Basilica and the Sistine Chapel, where you’ll view Michelangelo’s frescoes which have been restored to their full, colorful glory. Dinner and overnight at hotel.(B-D)